There should be no 'but'

One of my pet hates is starting a sentence like, "I'm not racist..." and following it with a 'but'. Invariably what follows is a racist statement, or a statement justifying racism. There is no but. It should just be "I'm not racist." I've noticed few examples of this that have frustrated me.

The first is "The Palestinian deaths are tragic but..." The next bit is, "Israel must defend herself," and something about how they are unavoidable and/or, "It is Hamas' fault." Both are true. Both are/should be irrelevant when discussing the tragic nature of Palestinian deaths. We need to distance ourselves from this culture where justifying death is permissible. There should be no but, there is no justification for the deaths of innocent Palestinian civilians. Rather, let's say, and mean, "The Palestinian deaths are tragic and we pray there is a way to end them whilst still protecting Israeli civilians." Because you know what? There is. The removal of Hamas, but that is a political point we do not need to argue here.

This works the other way, the second is: "Israel has a right to defend herself but..." or "The rocket attacks are terrible but..." The but is usually followed by some reference to no Israelis dying or the fact that Palestinians do or some other statement contradicting the principle of the bit before the but. Again, there is no but. Israel has a right to defend itself, full stop. The rockets are terrible full stop. It's the same as above, stop justifying rocket attacks and stop reducing the capacity of Israel to defend herself.

Owen Jones is responsible for an awful example of the above, whilst his latest piece in The Guardian is horrific for other reasons.

Firstly, he quotes a human rights activist saying that Israel is targeted by "shitty rockets" and that Israel has bomb shelters etc whilst Gaza does not. The former is an example of "The rockets are wrong but..." That the rockets aren't very good is no excuse, is no justification for their use. This reward for Hamas' incompetence vs Israel's ability to protect her civilians is bizarre. The latter is simply false. Gaza is awash with bomb shelters. It's just that the civilians are not allowed to use them, Hamas forces them into the firing line using them as human shields.

Secondly, Owen, in one brilliant paragraph manages to both justify Hamas rockets into civilian areas *and* belittle the fear amongst Israelis that he states you should not belittle. It really is a feat of journalism not to be sniffed at. The first sentence of the second paragraph gets off to a good start. There is no defence for Hamas' firing of rockets into civilian areas and you should not belittle the fear that it causes Israelis in the bomb shelters. What he then goes to do is say 'but Israel has weapons and the rockets aren't very good' defending exactly what he states there is no defence for and belittling exactly that which he claims should not be belittled. What relevance does the ineffective nature of the rockets (which do kill, which do injure and which do damage property all whilst instilling a sense of fear into Israelis running for the bomb shelters) have? Similarly, why should the fact that Israel can defend herself and defend herself well make any difference to whether Hamas rockets are indefensible or Israelis should be scared of them? These two facts bear no relevance, not to media coverage (I mean, if Hamas fires a rocket into Israel, should the fact that Israel has "nuclear bombs" change the fact that Hamas fired a rocket into Israel?) and not to the initial statements that Owen makes and then dismisses.

Owen then tells us that 565 Palestinians were killed since January 2009. He also tells us that 28 Israeli civilians and 10 Israeli security personnel have been killed in the same period. Seems a huge difference, right? Firstly, this has the horrible implication that somehow if 565 Israelis died, this would be okay. It is not Owen's intention, but the implication is some sort of barbaric bible-style eye for an eye justice would be preferable, as if somehow the 565 Palestinian deaths would be less bad if 565 Israelis had died. What's worse is Owen's deliberate misleading of his readers. In order to make it seem like more Palestinian civilians have been killed, he does not distinguish between, civilians and terrorists on the Palestinian side, but does distinguish between civilians and security personnel on the Israeli side. If you click on the link he provides, you will find that the number of civilians that died is about half that which Owen suggests it is, an intentional misrepresentation of the facts. Why distinguish on the Israeli side but not the Palestinian side? Is it because 565 reads much worse than the lower figure representing solely civilian casualties? Anything to make Israel seem even worse, eh? The irony of it all is, is that 242 civilians killed in the Gaza strip is still a horrifically high number, 242 higher than Israel wanted. 242 is still a tragically shocking number. Owen Jones, however, feels he needs to distort the facts to paint Israel in a bad light to suit his agenda. 242 deaths is not enough for Owen apparently.

Finally, in a bizarre move, Owen tells us that Human Rights Watch is not a "den of lefties." Perhaps. The organisation has its own anti-Israel bias that Owen would no doubt agree with. Its director, for example, finds it impossible to condemn unequivocally the kidnapping of Israeli teens. Every time he tried to, he managed to criticise Israel for her actions or mention the teens were settlers. As if either justifies the kidnapping and murder of innocents. Kidnapping teens is awful but...

I've just read Mira Bar Hillel's piece in the independent. Her overriding point is bizarre - because, in a democracy, there are politicians who believe and say horrible things, she is considering burning her Israeli passport. By her logic when Nick Griffin became an MEP we should have all been on the verge of burning our passports. Regardless, that's not what is wrong with the article. No, what's wrong with it is that she commits the cardinal 'but' sin. Not only does she make the same mistake as our friend Jones above, justifying Hamas terror because Israel can defend herself but she also places Israel and the Nazis on the same level. "I'm Jewish and the Holocaust was terrible - I should know right? My aunt and children perished but..."

Frankly, burn your passport Mira. Burn it now. We don't want Hamas apologists and Jews who compare Israel to the Nazis on our side.

Mira Bar Hillel read my blog. But she didn't read it very well. 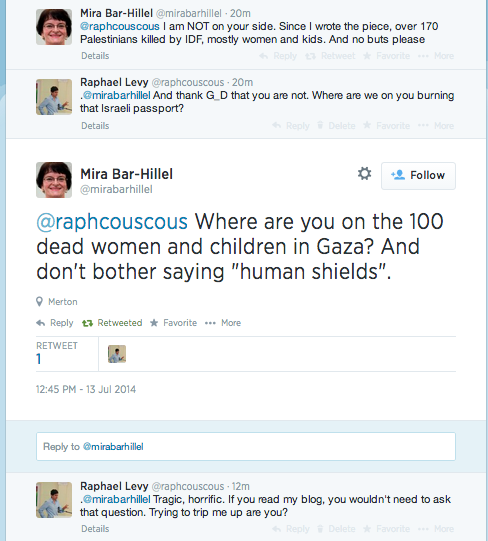 Hi!
Thanks for visiting my blog. My name is Raphael and I am currently working for Lucid, a technology start-up. I have also been called to the Bar, having completed the BPTC. Before that I was completing my Law degree at the University of Oxford and in ancient history, I was at the University of Cambridge completing an M.Phil. in Philosophy. My first degree was in PPE from the University of Warwick.
My interests, in no particular order, include but certainly are not limited to Philosophy, with a focus on Platonic and especially the Republic, public speaking, mental health issues, Law, mooting and debating, Feminism, (watching) football and (playing) rugby. I am currently also a tax researcher with Wolters Kluwer, though I should presumably point out, in case you assumed otherwise, that I obviously write in a personal capacity and, indeed, that my views are probably someone else's so please sue them for anything I say, rather than Wolters or myself.
I took to writing, initially about Manchester United (where I am a season ticket holder), back in 2010 and enjoyed it so much that I expanded my blog to pretty much anything that takes my fancy. So if you're up for a weird mix of my interests and beyond, then do keep coming back and, of course, share widely.
If you would like to get in touch about anything then send me a tweet (and follow me): @RaphaelLLevy. You can also check out my website, where you will find my travel blog (The Croissant Chronicles) here.
Enjoy the blog
Raphael