They should have been friends

This photo I came across recently courtesy of the Peace Factory and the Palestine/Israel loves Israel/Palestine groups on Facebook gives me chills every time I see it. It sums up the horrific situation Israelis and Gazans find themselves in. It is a beautiful, yet heartbreaking photo of two young boys with a remarkably simple message. 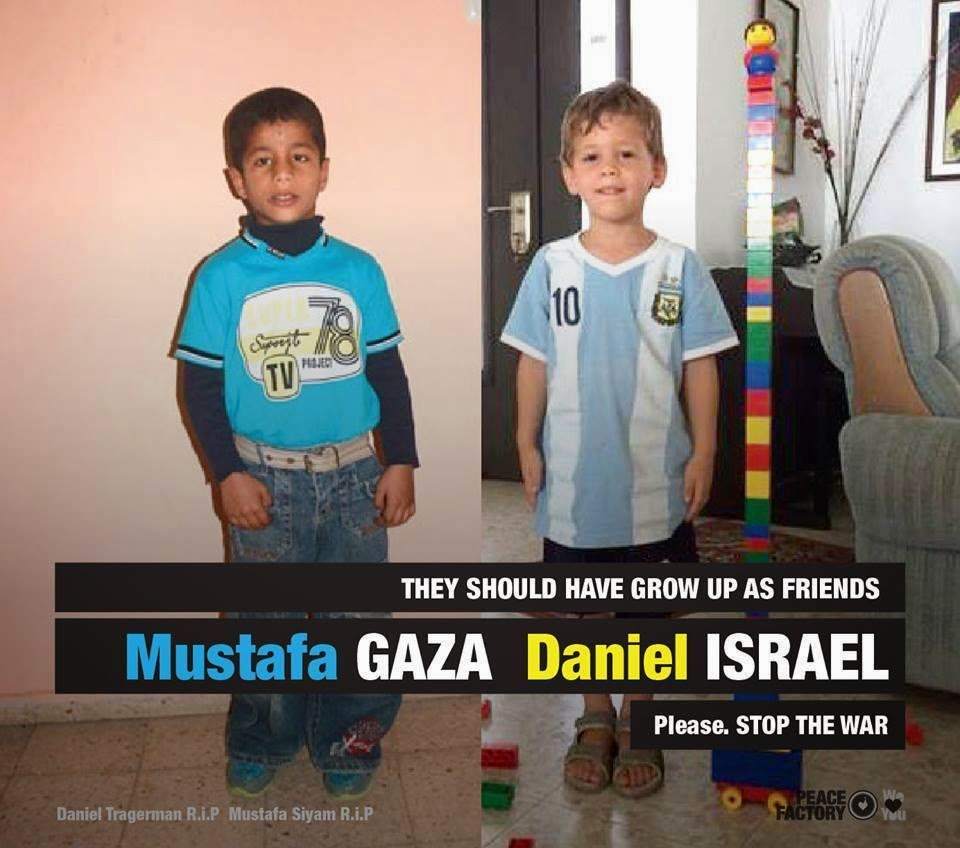 Two young boys who could still be alive today if we had chosen peace not war; reconciliation not revenge; and love not hate.
Posted by Cous Cous Diaries at 25.8.14

Hi!
Thanks for visiting my blog. My name is Raphael and I am currently working for Lucid, a technology start-up. I have also been called to the Bar, having completed the BPTC. Before that I was completing my Law degree at the University of Oxford and in ancient history, I was at the University of Cambridge completing an M.Phil. in Philosophy. My first degree was in PPE from the University of Warwick.
My interests, in no particular order, include but certainly are not limited to Philosophy, with a focus on Platonic and especially the Republic, public speaking, mental health issues, Law, mooting and debating, Feminism, (watching) football and (playing) rugby. I am currently also a tax researcher with Wolters Kluwer, though I should presumably point out, in case you assumed otherwise, that I obviously write in a personal capacity and, indeed, that my views are probably someone else's so please sue them for anything I say, rather than Wolters or myself.
I took to writing, initially about Manchester United (where I am a season ticket holder), back in 2010 and enjoyed it so much that I expanded my blog to pretty much anything that takes my fancy. So if you're up for a weird mix of my interests and beyond, then do keep coming back and, of course, share widely.
If you would like to get in touch about anything then send me a tweet (and follow me): @RaphaelLLevy. You can also check out my website, where you will find my travel blog (The Croissant Chronicles) and my food blog (The Truffle Stories) here.
Enjoy the blog
Raphael